“Most Eugenists are Euphemists. I mean merely that short words startle them, while long words soothe them. And they are utterly incapable of translating the one into the other, however obviously they mean the same thing. Say to them ‘The persuasive and even coercive powers of the citizen should enable him to make sure that the burden of longevity in the previous generation does not become disproportionate and intolerable, especially to the females’; say this to them and they will sway slightly to and fro like babies sent to sleep in cradles. Say to them ‘Murder your mother,’ and they sit up quite suddenly. Yet the two sentences, in cold logic, are exactly the same. Say to them ‘It is not improbable that a period of time may arrive when the narrow if once useful distinction between the anthropoid homo and the other animals, which has been modified on so many moral points, may be modified also even in regard to the important question of the extension of the human diet’; say this to them, and beauty born of murmuring sound will pass into their face. But say to them, in a simple, manly, hearty way ‘Let’s eat a man!’ and their surprise is quite surprising. Yet the sentences say just the same thing.”

“And when I came to you, brethren, I did not come with superiority of speech or of wisdom, proclaiming to you the testimony of God. For I determined to know nothing among you except Jesus Christ, and Him crucified. I was with you in weakness and in fear and in much trembling, and my message and my preaching were not in persuasive words of wisdom, but in demonstration of the Spirit and of power, so that your faith would not rest on the wisdom of men, but on the power of God.” (1 Cor. 2:1-5)

In his book Biblical Logic: In Theory and Practice, Dr. Joel McDurmon makes an interesting observation regarding the above passage:

Paul reminded the Corinthians that he purposefully avoided cunning rhetoric in favor of the plain, powerful Gospel. Historically, however, people give in to the temptation to trick and dupe others by using persuasive words rather than godly wisdom. Aristotle provided the first systematic examination of logic, and he did so primarily because of the prevalence of trained rhetoricians who hired out their persuasive abilities for money. Many became very rich and famous. This group of “sophists” (from the Greek sophos, “wise”; of such people see Rom. 1:22) did not care about the truth of any particular issue; they merely cared about winning the argument for their paying clients. Sophists prided themselves on their ability to take either side of any argument and win. (p. 65)

This is something we writers should bear in mind. Clever rhetoric, in and of itself, is a good and useful thing. But it’s not the best thing. And sometimes, it just gets in the way.

I have a deep and heartfelt respect for the writings of men like J.C. Ryle, Charles Spurgeon, and Thomas Watson. Most impressive, for me, is their ability to write with artistic aplomb while keeping the Gospel ever at the forefront. Their talent with the pen is remarkable – their sense of priorities even more so. 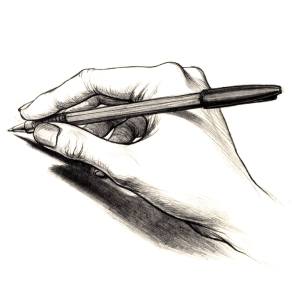 I can learn a thing or two from these great men. No, strike that: I can learn a lot. We all can. When the time comes to set pen to paper (or fingers to keyboard, as the case may be), we would do well to consider where our inky scratchings point: back to ourselves or beyond ourselves? Do we remember that the ultimate goal of our writing should be to reflect the glory of Christ and the beauty of His Gospel? Or do we stifle these things in a lather of vain, self-important prose?

I’m all for clever writing, but we should have discernment in knowing when and where to use it. “To every thing there is a season,” says the Preacher in Ecclesiastes. There’s a time for witty repartee, dazzling wordplay, and literary shenanigans. And there’s a time when we need to set these things aside and forge ahead with unabashed, unadorned plainness.

At all times, however, let us remember that we write for God’s glory and not our own. If we place our trust in cunning rhetoric and artsy prose, relying (as McDurmon puts it) on persuasive words rather than godly wisdom, then our writing is no better than the whited sepulchers of Matthew 23:27, “which indeed appear beautiful outward, but are within full of dead men’s bones, and of all uncleanness.”

“Of course, the nonexistence of God is nothing more than a nonsense option. The categories of good and evil themselves require some sort of transcendent standard. What makes things good? What makes things evil? Atheists have, by and large, given up on the idea of an absolute standard of morality. After all, spiritual emptiness and the non-existence of anything outside of the simple material universe is no way to come up with an ethical system. Morality is a cultural preference (which cannot be said to be right or wrong) and fundamentally relative. It takes on (to be generous) the same authority as Wisconsin speed limits on a Nevada highway at night.

People are raped in this world, and rape is evil. Because evil exists, there must be no God. Because there is no God – no authoritative standard over creation – the badness of rape downgrades to a mere matter of societal taste. Ethnic cuisine, ethnic ethics. In God’s absence rape is no longer fundamentally evil. In our country, you’ll get confined to a cell (if caught and convicted). But that just means we enforce our taste, not that our taste has any real authority over anyone else. In other societies, girls have been passed around and traded like baseball cards. Is that right? Is that wrong? Neither. You like exploitation; I like apple pie. The two discussions exist on the same plane. There’s no such thing as moral or immoral. In our country, we eat gyros. In this one, we eat pizza. And we’ll give you a ticket for jaywalking.

Stunning. Such wisdom is like a kiss on the lips.

To quote one contemporary prophet: ‘You and me, baby, ain’t nothing but mammals, so let’s do like they do on the Discovery Channel.’

I’ve watched the Discovery Channel. I’ve enjoyed the Discovery Channel. But in that world, if I want to reproduce with you (or tear you limb from limb), I just need to be bigger and stronger than you are. You look pretty small and a little sickly. Shall I feed you to my young? Why not? Cannibalism might not be condoned in your culture, but it has been a long and storied tradition in mine. Are you saying your culture is superior, that it is somehow right while mine is wrong? You’re being a racist, but luckily you’re still small, and even racists taste good in casserole.”