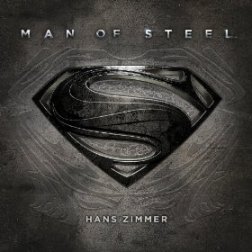 I know you probably get tired of hearing me say this, but it’s the truth: Hans Florian Zimmer is a flipping music wizard. Seriously. He’s one of the best there is at what he does, and on a scale of one to ten with regard to Sheer Epic Magnificence, his latest work – Man Of Steel – is a rock solid eleven. Emotion, grit, and grandeur collide in superheroic measures for nearly two hours; if that doesn’t put a smile on your face, I don’t know what will. You want heart? Here you go. You want excitement? Gotcha covered. A robust and memorable theme worthy of the Last Son of Krypton? It’s right here. As one fellow put it,

Standout Tracks:
– DNA
– Goodbye My Son
– If You Love These People
– Terraforming
– This Is Clark Kent
– Flight
– What Are You Going to Do When You Are Not Saving the World?
– Man Of Steel (Hans’ Original Sketchbook)
– General Zod
– This Is Madness!
– Arcade

A postscript, as my attempt to answer some questions you might possibly have:

Q. “How does it compare to John Williams’ score for the original Superman?”
A. I think I’ve decided it’s unfair to compare the two. Admittedly, I’m not the biggest fan of Williams’ work there, but it fit Donner’s style well enough. Zimmer’s take is darker and more muscular, and if the previews we’ve seen are any indication, that’s precisely the kind of score Man Of Steel needs.

Q. “Does it sound like a rehash of The Dark Knight scores?”
A. No. Absolutely not. It sounds like Zimmer, of course – if you’re a hater, get lost – but there’s very little similarity between this and his other work for the DC Universe. One major difference is that Man Of Steel sounds far more enthusiastic and hopeful overall – which is good, since an uber-intense and moody score wouldn’t work for Supes the way it does for Bats.

Q. “Is the Deluxe Edition worth the extra moolah?”
A. Heck yes. You get half an hour’s worth of extra music. Do it.