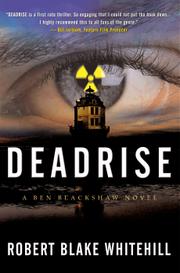 Has any hero, in any adventure novel, ever discovered a treasure that didn’t get them into trouble? Gold seems to attract the most unsavory of characters and situations, from pirates to politicians to rogue agents to the threat of global catastrophe.

Or all four at once if you’re Ben Blackshaw.

When diving in the Chesapeake Bay, this retired Navy SEAL finds something far more valuable than oysters: a wrecked boat, a corpse, millions in gold, and enough explosives to start World War III. From that point on, his life gets considerably more interesting. And not in a good way.

Will our heroes ever learn to leave the gold and pursue a different, less hazardous career? One with a lower body count? Someday perhaps. But until then, we may as well enjoy the ride.

Deadrise is Robert Whitehill’s first novel. It’s a good one. Not simply “good for a first time effort,” but really, truly good. Whitehill writes with the skill of an experienced storyteller, and his work here far exceeded my initial expectations.

For one thing, the quality of Whitehill’s writing is exceptional. Not flawless, but still several cuts above average. There’s a sharp efficiency to it that compliments the frenetic pacing of the story, and I lost count of the times I vowed to read “just one more chapter” only to find myself reading four or five. Deadrise is pretty much the textbook definition of a page-turner.

The supporting characters are adequate, if not terribly interesting, but Whitehill’s best work is the character of Ben Blackshaw: a reluctant hero whose cultural background is just as important as his military training. Not, mind you, that his military training is anything to thumb your nose at…

Opposite Mr. Blackshaw is Maynard Chalk, corrupt NSA operative and villain extraordinaire. He’s brooding, vicious, utterly self-centered, and yet graced with an inexplicable amount of charm. He steals the scenes and chews them up. He is, in other words, a very good very bad bad guy.

The story itself is well plotted and consistently engaging, with one foot planted in reality and the other planted in a world of fantastical adventure – sort of like Indiana Jones meets Tom Clancy, with several unique twists of its own. I look forward to reading more of Whitehill’s work. He’s made quite an entrance, and I can’t wait to see where he goes next.

(It should be noted that Deadrise isn’t something to pick up for family read aloud. It’s for mature audiences only, due to strong language, brief sensuality, and a number of violent, intense, and occasionally gory action scenes.)

(I received this book free in exchange for a review.
I was not required to write a positive review.)