“I do not miss childhood, but I miss the way I took pleasure in small things, even as greater things crumbled. I could not control the world I was in, could not walk away from things or people or moments that hurt, but I took joy in the things that made me happy. The custard was sweet and creamy in my mouth, the dark swollen currants in the spotted dick were tangy in the cake-thick chewy blandness of the pudding, and perhaps I was going to die that night and perhaps I would never go home again, but it was a good dinner, and I had faith in Lettie Hempstock.” 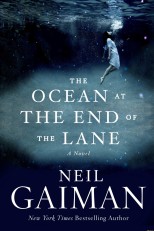 One of the first novels I read this year was Neil Gaiman’s The Ocean at the End of the Lane. Wonderful, wonderful book. The day I finished it, I wrote, “I know it’s only January, but I can’t imagine reading another novel this year that’s half as magical as this one.”

We now approach the end of March and I stand by my prediction. Like N.D. Wilson and the late Sir Terry Pratchett, Gaiman is one of a handful of contemporary fiction writers I feel it my solemn duty to recommend to everyone I meet.  (On that note, if you’re looking for somewhere to start, pick up Coraline. You can’t go wrong with it.)

And while it’s a popular style of compliment among reviewers to call this or that novel “like nothing I’ve ever read before,” I can’t say this of Ocean. It would be untrue, and further, it would be damning it with faint praise. It is because I have read something like it before that Ocean is such a formidable bit of storytelling.

Gaiman is no hack – the very idea is farcical. But he is carrying on a tradition, and the mantle of writers like C.S. Lewis and Lloyd Alexander looks rather splendid draped across his shoulders. I can’t help but think they would be chuffed to see it worn so well.

In Ocean‘s opening pages, our protagonist (nameless throughout the story) declares his affection for the myths of old: “They weren’t adult stories and they weren’t children’s stories. They were better than that. They just were.”

How fitting that Gaiman’s own story should achieve this very quality. Did you ever stand in your pajamas under a full moon, no shoes, just your naked feet touching the ground? Ocean is like that: a perfect marriage of the tangible and the transcendent. In a word, timeless.