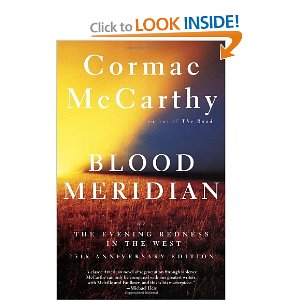 Based on historical events that transpired on the Texas-Mexico border in the 1850s, Cormac McCarthy’s Blood Meridian traces the fortunes of the Kid, a fourteen-year-old Tennesseean who falls in with a band of bounty hunters in pursuit of Indian scalps. Eschewing the conventions of the Western genre, McCarthy paints a raw and unforgettable picture of the oft glamorized “wild west” and weaves a bleak but thought-provoking tale of human depravity and violence.

Having read and appreciated two other McCarthy titles (The Road, No Country For Old Men), I suppose it was inevitable that I should pick up Blood Meridian, hailed by prestigious literary critic Harold Bloom as “the major esthetic achievement of any living American writer”. Having read it, I can almost agree with that assessment: I still consider The Road to be McCarthy’s finest work, but Blood Meridian is formidable in its own right.

I’ve praised McCarthy’s writing before, and I do so now again. His prose is positively breathtaking: elegant yet plain, simple yet complex, fantastical yet earthy. This alone places Blood Meridian head-and-shoulders above the vast majority of contemporary fiction – combined with an authentic narrative and vivid characters, it simply soars.

The major theme of the story is human depravity and the horrors of which we are capable when left to ourselves. It is as clear a picture of man in need of redemption as I have seen in fiction. At the beginning of the book is a quote by Jocob Boehme which reads,

As title and the premise suggest, Blood Meridian is a very violent book – probably the most violent book I’ve ever read. Killings are frequent, hard-hitting, and bloody, and generally calculated to make your stomach turn. That said, it’s important to add that the violence is never sensationalized: McCarthy does not revel in it nor exploit it for entertainment value. He simply presents it to the reader in a very real, matter-of-fact way. And the story is all the more effective for it.

Graphic imagery, some crude language, and one brief instance of implied sexuality go hand-in-hand with the violence. Quite obviously, this book is suitable only for the most mature readers. Emphasis on the word “mature”.

It’s hard to say one loves Blood Meridian. For those who can handle its harshness, however, I do believe it’s worth reading. Beneath the grit and McCarthy’s exceptional prose, it’s a haunting, thought-provoking tale that reaches out and hits you in a way you’ll never forget.