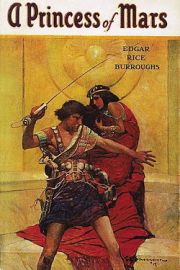 Meet John Carter. Gentleman of Virginia. Civil War veteran. Fighter, adventurer, treasure-seeker. Did I mention he’s also been to Mars? Well he has. He’s rather famous there, too. All things considered, this guy makes Indiana Jones look like a couch-potato with a fedora fetish.

Mr. Carter gets his introduction in A Princess of Mars, the first in an eleven book series by Edgar Rice Burroughs. The author’s name may not ring any bells for you, but you’re probably familiar with his work. He’s the writer behind Tarzan of the Apes, and his Barsoom series – which began with A Princess of Mars – went on to inspire the likes of Bradbury, Heinlein, and Clarke. Whether you realize it or not, E.R.B. has left a giant Tharkian footprint on science fiction. I for one am mighty glad he did.

The story opens with a lengthy narration by Carter, as he explains how he went from hiding in cave in Arizona – he ran afoul of the local Apaches, it seems – to waking up on the fourth planet from the sun. It’s actually a non-explanation (the details of this weird transportation are never fleshed out), but that’s something you’ll have to get used to if you read A Princess of Mars. Sometimes things just happen. Deal with it. Once the story gets going, you won’t care much about how John Carter ended up on Mars; you’ll just be happy things worked out that way.

In no time at all our hero is picked up by the Green Men of Thark and held as prisoner. Carter isn’t exactly suited to captivity, though, and he soon earns a reputation among his “hosts” as someone not to be trifled with (having a body count on your resume will usually help with that). His strength and skill eventually gain him a high position in the tribe, and he becomes the friend and ally of Tars Tarkas, a noble Thark chieftain.

All this is but a prelude to the real story: the one involving Dejah Thoris, Princess of Helium, captor of John Carter’s heart. Throw in some political intrigue, lots of derring-do, a touch of romance, and a sense of humor, and you’ve got yourself one of the most shamelessly entertaining popcorn novels ever written. Grab your favorite beverage and prepare to watch a plucky little sword-wielding Earth-man wreak havoc on another planet (Barsoom, as the natives call it). It’s good pulpy fun.

Burroughs is a great writer, and his vibrant descriptions of the Martian landscape lend the story a firm sense of place, bringing the planet and those who dwell there to strange but exciting life. The story is about as straightforward as they come; it’s not stupid, and it’s not Heinlein – it’s just entertaining. And frankly, in a literary scene dominated by cynical, world-weary protagonists, there’s something refreshing about a hero as square and unironic as John Carter: loyal friend, fearsome enemy, determined lover, helper of the distressed. I read one review which described him as “egotistical in the extreme,” but I never found this to be true. The man is simply confident in his abilities. Perhaps we’ve forgotten what that looks like in a hero. I’d love to see more of it.