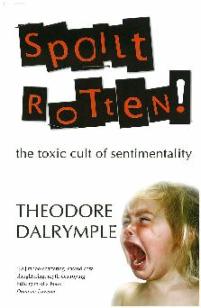 To begin with, Heaven help the man, woman, or Yeti responsible for the – yes, I’ll say it – rotten cover design on display here. What kitsch.

Thankfully, that is the last negative thing I have to say about this book, because the rest of it is pure gold – gold with a British accent, which makes it even shinier. I encourage you to buy a copy for yourself, several for your friends, and a few dozen extra to pass out at the local college campus. Trust me: our colleges need it even more than you do.

As anyone with half a brain can tell, Dalrymple is not into pulling his punches. If you pick up Our Culture, What’s Left of It, it’s rather like scrambling into the ring with Joe Louis, only much better for your health. If you enjoyed that book, as I did, then you will absolutely love Spoilt Rotten. With his typical eloquence and Johnsonian wit, Dalrymple examines the way sentimentality has usurped the public sphere, with disastrous (though frequently unacknowledged) results.

When sentimentality becomes a mass public phenomenon, it becomes manipulative in an aggressive way: it demands of everyone that he join in. A man who refuses to do so, on the grounds that he does not believe that the purported object of sentiment is worthy of demonstrative display, puts himself outside the pale of the virtuous and becomes almost an enemy of the people. His fault is a political one, a refusal to recognize the truth of the old saw, vox populi, vox dei – the voice of the people is the voice of God…

Like I said, buy one or twenty copies. Consider it an investment. In high explosives. With stentorian returns. I bid you all, in the immortal words of that great philosopher Samuel Jackson, to “hold onto your butts.”