1. ANGELS IN THE ARCHITECTURE by Douglas Wilson & Doug Jones (review)
2. DEATH BY LIVING by N.D. Wilson (review)
3. IN DEFENSE OF SANITY edited by Ahlquist, Pearce, & Mackey (review)
4. BED AND BOARD by Robert Farrar Capon
5. CONFESSIONS by Augustine
6. ORTHODOXY by G.K. Chesterton (review)
7. THE CREEDAL IMPERATIVE by Carl Trueman (review)
8. REFORMED IS NOT ENOUGH by Douglas Wilson
9. THE CHRISTIAN IMAGINATION edited by Leland Ryken
10. THE RIGHT STUFF by Tom Wolfe (review)

11. THE SUPPER OF THE LAMB by Robert Farrar Capon
12. THE SEARCH FOR GOD AND GUINNESS by Stephen Mansfield
13. PENSEES by Blaise Pascal
14. IDEAS HAVE CONSEQUENCES by Richard Weaver (review)
15. TOTAL TRUTH by Nancy Pearcey

Several weeks ago, a friend of mine expressed interest in my opinion of Chesterton’s thoughts on Calvinism:

Surely you encountered his position while reading Orthodoxy, if not in other places. I would not presume to take every word of his as gospel of course, but if I were Calvinist I would be hesitant to recommend him without a disclaimer, especially considering the influence and effectiveness of his writing. Admittedly I’m somewhat confused by your advocacy of Chesterton (although I obviously encourage it in general).

It’s a good question, and I’ll do my best to answer it as briefly and thoroughly as possible. I suspect there are others who read this blog who may be wondering the same thing. 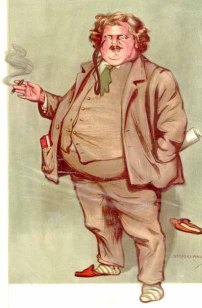 I am indeed aware of Chesterton’s antagonistic attitude toward Calvinism. In Orthodoxy, for example, he asserts that it was Calvinism which drove William Cowper to madness. In Eugenics and Other Evils, he calls Calvinism “immoral” and “the most non-Christian of Christian systems.” How then, as a staunch lover of the historic Reformed faith, can I feel comfortable recommending such works without a booming disclaimer?

It’s very simple, really: as a critic of Calvinism, the Prince of Paradox is a bit of a clown.

Remember the scene in V for Vendetta, where Evey awakes to find the hero fencing with an empty suit of armor? It is all very winsome and dramatic, but of course, it is to battle what O’Doul’s is beer: a complete and utter joke.

A similar thing happens whenever Chesterton takes a swipe at Calvinism: he blusters a lot and tips his nose in the air and generally makes it clear that he doesn’t approve. And then he moves on. He never seriously engages with it mano-a-mano. Perhaps there is an essay somewhere in which he actually plants his foot and does bloody battle to the death over the matter, but in all my reading thus far, I haven’t encountered any such thing.

GKC was never one to dance around the point, so I won’t either: on the subject of Calvinism, the man was hilariously, absurdly wrong. No offense to my dear Reformed Baptist friends, but in the words of Tim Bayly, “Listening to Chesterton on Calvinism is like listening to John Piper (or worse, John MacArthur) on infant baptism.”

Yeah. Hard to take seriously, in other words.

Chesterton’s potshots are so risibly ill-aimed that I am more amused than challenged (let alone concerned) by them. I think it fair to say that Calvinists who know why they are Calvinists will not be knocked out of their position by a bit of rhetorical skylarking.

Stop telling me to believe in myself.

No, seriously. Stop it.

I know you mean well, but I also know what the road to hell happens to be paved with (and with all due respect to Stephen King, it ain’t adverbs). Spare me the sentimental goop, the lectures on self-esteem, enlightenment, and so forth. A spoonful of sugar helps the medicine go down, but what you’re offering is not medicine, Doc. It’s poison.

You tell me to believe in myself. I’ve tried that before, and I’ll tell you what: I scare me.

A trend. It goes like this: when I “believe in myself,” things get messy. Like, PB&J-smeared-all-over-my-honey-covered-face kind of messy. Why?

It’s simple, really. I look within and here’s what I see: I see death and I see darkness and I see desperation and I see depravity. It gets worse, because I know that what I see is not even the half of it. I don’t need to believe in myself, because there’s nothing there worth believing in. That’s why the Son of Man was nailed to a tree and bled and died and rose two thousand years ago – to wash away the darkness and the filth and to bring light to my soul. And get this: that light was no “inner light.” It was Outer Light, a Light Completely Alien to Me. And the initiative was His.

You tell others to believe in themselves. So they do, and I’ll tell you what: they scare me.

Another trend. It goes like this: when men start believing in themselves, things get messy. Like, wars-across-Europe-and-blood-in-the-Seven-Seas kind of messy.

I see lots of people running around who believe in themselves, people who haven’t the faintest five o’clock shadow of a doubt about themselves. And they should have a doubt. They really should.

Let the Moguls of Self-Esteem rattle their sabers. Who needs them? Perhaps it’s time we consider the possibility… no, the probability… no, the dead-certain fact that Modern Man could use a little less faith in himself and a little more fear of himself. We are the blind who lead the blind, all the while insisting that our vision is 20/20. Short of bloody Divine intervention, there is no happy ending to that story.

So you know what? I think I’ll hang with Chesterton on this one. I think the jolly old soul was on to something when he wrote the following in Orthodoxy:

Once I remember walking with a prosperous publisher, who made a remark which I had often heard before; it is, indeed, almost the motto of the modern world. Yet I had heard it once too often, and I suddenly saw that there was nothing in it.

The publisher said of somebody, “That man will get on; he believes in himself.” And I remember that as I lifted my head to listen, my eye caught an omnibus on which was written “Hanwell.” I said to him, “Shall I tell you where the men are who believe most in themselves? For I can tell you. I know of men who believe in themselves more colossally than Napoleon or Caesar. I know where flames the fixed star of certainty and success. I can guide you to the thrones of the Super-men. The men who really believe in themselves are all in lunatic asylums.”

Shortly after G.K. Chesterton published Heretics in 1905, he was issued a challenge which went something like this: “Oh yeah? Well, tell us what you believe, then.”

Several critics for whose intellect I have a warm respect said that it was all very well for me to tell everybody to affirm his cosmic theory, but that I had carefully avoided supporting my precepts with example. “I will begin to worry about my philosophy,” said Mr. Street, “when Mr. Chesterton has given us his.”

This was (as GKC goes on to say) “an incautious suggestion to make to a person only too ready to write books upon the feeblest provocation.” I like to imagine that when Mr. Street took up Chesterton’s response, he felt rather like a school boy who finds to his dismay that the fat kid he’s been picking on is really a heavyweight boxing champion. It would not be a nice surprise, but getting the air beaten out of him might do the bully some good, provided he takes the drubbing to heart. We can hope Mr. Street did exactly that.

Orthodoxy is a poetic, precise, and screamingly funny right hook to the skeptical jaw. Ten pages in, the newcomer must inevitably feel that Chesterton is something of a nut; twenty pages will confirm this; thirty will bring about the conviction that we need more nuts like him, for his madness is a healthy madness. Chesterton appears insane to the modern reader precisely because he is saner than the modern reader. It is not he who wears the fool’s cap, but we. The Little Emperors have no clothes, and Chesterton is laughing at us.

Sitting down to write this review, it occurred to me that any sort of lengthy, wise-eyed, or “scholarly” analysis was simply out of the question. Firstly, because my head is still hurting; it’s a wonderful kind of hurting – the kind that settles in your stomach after feasting too long and too well – but something tells me that any serious attempt at moving around would result in a cranial blowout.

And brain matter is notoriously sticky to clean up.

The second reason is simpler and goes like this: one of the the chief joys in reading Orthodoxy is the joy of the unexpected. It’s like stepping onto a rollercoaster for the very first time as a kid: you’re not really sure how the thing works or where it’s going or how it will get there without spilling you and everybody else out onto the ground. Attempts to prepare you beforehand will ultimately fall short. You have to experience it for yourself.

When the ride is over, when you’ve screamed and laughed and maybe even thrown up a little bit, you’ll smile and say: “Can we do it again, please?”