“I’ll never forget my poor beleaguered roommate talking with me after he took a risk and told a nice young lady that he liked her. They went on a long walk. He was pretty sure she would reciprocate his declaration of affection. But it turned out she wasn’t interested. She was a sweet girl, a good Christian. She didn’t mean to have bad theology. But instead of just saying ‘I’m not interested’ or ‘I don’t like you’ or ‘Quit stalking me’ or something, she went all spiritual on him. ‘I’ve been praying a lot about you,’ she demurred, ‘and the Holy Spirit told me no.’ ‘No?’ my confused roommate asked. ‘No… never,’ she replied.

Poor guy – he got rejected, not only by this sweet girl, but by the Holy Spirit. The third person of the Trinity took a break from pointing people to Jesus to tell this girl not to date my roommate. I didn’t know that was in the Spirit’s job description. But I bet at any Christian school there are scores of men and women blaming God for their breakups.”

“The love of Christ to sinners is a ‘love that passeth all knowledge.’ To suffer for those whom we love, and who are in some sense worthy of our affections, is suffering that we can understand. To submit to ill-treatment quietly, when we have no power to resist, is both graceful and wise. But to suffer voluntarily, when we have the power to prevent it, and to suffer for a world of unbelieving and ungodly sinners, unasked and unthanked – this is a line of conduct which passes man’s understanding.” 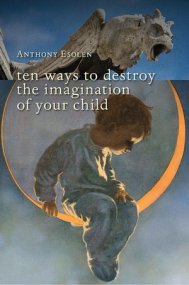 One day, God willing, I want to meet Anthony Esolen face-to-face. I want to shake his hand. And I want to thank him for blowing my mind.

Ten Ways to Destroy the Imagination of Your Child is a book I might never have picked up had I not first read The Politically-Incorrect Guide to Western Civilization, also by Esolen (he has a thing for long titles). His contribution to the P.I.G. series was terrific, to say the least, sooooo… I decided to look up more of his work.

Whoa. Didn’t expect me to do that, didya?

I mean, come on: whoever heard of finding a good writer and then reading just one of his books? Might as well eat just one potato chip. Only idiots do that.

Then, lo and behold, what sight did meet mine Elven eyes, but that of Ten Ways residing on my Mother’s shelf. I’m not sure why she never told me it was there; perhaps she forgot, or (what is more likely) she was concealing its whereabouts in hopes of getting to it first. Whatever the reason, I found it, and it was begging to be read. So I obliged.

I will say that the title is potentially misleading: this is not a book exclusively for parents, nor is it a “parenting book” (at least, not in the usual sense). Whether you’re a teacher or a student, whether you’re young or old, with ten kids or none at all, you should read this book. Anyone and everyone can benefit from Esolen’s keen writing and even keener insight. Clear enough? Let’s move on…

Ten Ways is a witty, gritty, and delightfully subversive assault on the Bastions of Modern Educational Theory and Practice. With a satiric flair worthy of Uncle Screwtape himself, Esolen offers his readers a way of “extinguishing the minds (and souls) of our children in ten easy steps.”

I do not claim that it is an exhaustive list. No doubt, many of my readers, blessed with a keener attention to the needs of the child, will have come up with others. But I am sure that a judicious application of even three of four of these methods will suffice to kill the imagination of an Einstein, a Beethoven, a Dante, or a Michaelangelo. Good luck! (p. xiii)

From beginning to end, the author’s pen drips with irony; his sense of humor is biting and bleakly funny. Remember the serrated edge? He wields it like a surgeon, and every cut is deep, precise, and painful. The truth hurts – and Esolen isn’t big on anesthetics.

Of all the endorsements I’ve read of this book, Father Dwight Longnecker’s is by far the most imaginative and (in my opinion) the most accurate: “Esolen rides forth like a noble knight to joust with the dragons of modern thought, the giants of contemporary culture, and the bevy of beasts that inhabit our post-modern wasteland.” I like it, don’t you?

Over the course of two-hundred forty pages, Esolen demonstrates how imagination is being strangled at nearly every turn: in the rearing of children almost entirely indoors; in the scorning of the true, the heroic, and the patriotic; in the reduction of love to mere narcissism and sex; in the leveling of the distinctions between men and women; in the way we preoccupy children with the shallow and the unreal; and in our stalwart, stone-hearted denial of the transcendent.

I like to imagine a blaring sign over a gigantic shopping mall, with these messages alternating every five seconds, forever and ever:

And not only hope, but community life, personal independence, common sense, virtue, and money.

For the great threat of the imagination, roused to life like Lazarus from the grave by the faintly heard voice of God, is that it makes a man a man, not a consumer, nor a clotpoll to be counted off in some mass survey. The praise of God is inscribed upon the heart of man, says Saint Augustine, “man who bears within himself his mortality, who bears about within himself testimony to his sin and testimony that you resist the proud.” Yet even so man longs to praise and cannot truly be himself unless he praises God, for as Augustine says in Confessions, “you rouse him to take joy in praising you, for you have made us for yourself, and our heart is restless until is rests in you.” If we have love of God, the saints all testify, what do we need from anything else? And if we do not have that love, not all the creature comforts and tricksy gadgetry and rubbings and itchings of appetite can fill up the tiniest corner of the chasm that remains. Yet we will try to fill the chasm anyway. That is what shopping malls are for. (p. 230)

I wanted to include the entire quote, except that it’s much too long to share here. Which brings me to the one complaint I have about this book: it’s too bloody quotable. Writing down all the magnificent passages that caught my eye proved impossible, since there were passages like that on just about every page. Highlighting? Forget it. The entire book would be yellow by the time you’re done. It’s too rich, too well-written. The unconvinced would do well to think of it this way: Esolen’s book is like a three-course meal, in an age when most people are content with dishing up McPamphlets. Get the picture?

Obviously, I loved this book. I think you will, too. On the other hand…

If you are any one of the above, I would almost advise you to skip Esolen’s writing entirely. But I can’t. Because of all the people who need this book, you need it most of all.

“Over against such inconsistent objections, we want to love. We love one another, and we seek to live this way. But does not the Bible say that we are to love our enemies and pray for those who persecute us? Yes, it does, and yes, we do. But love is defined by God and not by Hallmark cards.

Thus far, I have only spoken about those who labor with me in this ministry. But because the tone of my writing is a big part of why objections are raised, let me end this short book on a more personal (and serious) note. The argumentation has already been laid out. But there is an autobiographical element in this that should explain to everyone who has ever wondered about the tone of my writing – where does that edge come from? What got under his skin?

If you think I have faults, you are certainly right, and I can assure you that it is probably far worse than you think. But shoplifting is not one of them, and neither is nastiness. I am a sinner, but happily my critics at a distance have collectively decided to leave all my real problems alone.

The motivation for all that they do criticize is love. Love that refuses to defend that which is loved is not biblical love at all. Such a sentiment is actually self-absorbtion. Love that shuns a fight is an oxymoron, and so I turn the charge around. The modern evangelical world says peace, peace, but there is no peace. Neither is there love.

I love the right worship of our triune God, the God and Father of the Lord Jesus Christ, and the Holy Spirit of both. I love the Church, despite the make-up she is currently using. I love the Scriptures, and the message of free grace it brings to a race steeped in idolatrous folly. I love my wife, children, and grandchildren. Though I haven’t seen them, I love my great-grandchildren and want my descendants to have a place to live in this world where they can worship God with more than three chords. I love my parents, brothers, sister, cousins, nieces, and nephews. God has given us a heritage that I intend to love fiercely until I die. I love the Reformed faith – both its glorious past and yet more glorious future.

And if this serious note makes some readers uncomfortable – though every word of it is true – I also love Pinot Noir, Mozart, Creedence Clearwater Revival, oatmeal stout, Brown Cow ice cream, mowing a field, playing softball, listening to blues, reading with my wife, playing the guitar, P.G. Wodehouse, clouds on the mountain, anapestic poetry, and making fun of uncircumcised Philistines.”