… critics of social institutions and traditions, including writers of imaginative literature, should always be aware that civilization needs conservation at least as much as it needs change, and that immoderate criticism, or criticism from the standpoint of utopian first principals, is capable of doing much – indeed devastating – harm. No man is so brilliant that he can work out everything for himself, so that the wisdom of ages has nothing useful to tell him. To imagine otherwise is to indulge in the most egotistical of hubris.

Another great essayist? G.K. Chesterton. This, from “The Drift from Domesticity”:

In the matter of reforming things, as distinct from deforming them, there is one plain and simple principal; a principal which will probably be called a paradox. There exists in such a case a certain institution or law; let us say, for the sake of simplicity, a fence or gate erected across a road. The more modern type of reformer goes gaily up to it and says, ‘I don’t see the use of this; let us clear it away.’ To which the more intelligent type of reformer will do well to answer: ‘If you don’t see the use of it, I certainly won’t let you clear it away. Go away and think. Then, when you can come back and tell me that you do see the use of it, I may allow you to destroy it.’

This paradox rests on the most elementary common sense. The gate or fence did not grow there. It was not set up by somnambulists who built it in their sleep. It is highly improbable that it was put there by escaped lunatics who were for some reason loose in the street. Some person had some reason for thinking it would be a good thing for somebody.  And until we know what the reason was, we really cannot judge whether the reason was reasonable. It is extremely probable that we have overlooked some whole aspect of the question, if something set up by human beings like ourselves seems to be entirely meaningless and mysterious. There are reformers who get over this difficulty by assuming that all their fathers were fools; but if that be so, we can only say that folly appears to be a hereditary disease. But the truth is that nobody has any business to destroy a social institution until he has really seen it as an historical institution. If he knows how it arose, and what purposes it was supposed to serve, he may really be able to say that they were bad purposes, or that they have since become bad purposes, or that they are purposes which are no longer served. But if he simply stares at the thing as a senseless monstrosity that has somehow sprung up in his path, it is he and not the traditionalist who is suffering from an illusion.

Connections. One of the greatest joys to be had in reading.

1. ANGELS IN THE ARCHITECTURE by Douglas Wilson & Doug Jones (review)
2. DEATH BY LIVING by N.D. Wilson (review)
3. IN DEFENSE OF SANITY edited by Ahlquist, Pearce, & Mackey (review)
4. BED AND BOARD by Robert Farrar Capon
5. CONFESSIONS by Augustine
6. ORTHODOXY by G.K. Chesterton (review)
7. THE CREEDAL IMPERATIVE by Carl Trueman (review)
8. REFORMED IS NOT ENOUGH by Douglas Wilson
9. THE CHRISTIAN IMAGINATION edited by Leland Ryken
10. THE RIGHT STUFF by Tom Wolfe (review)

11. THE SUPPER OF THE LAMB by Robert Farrar Capon
12. THE SEARCH FOR GOD AND GUINNESS by Stephen Mansfield
13. PENSEES by Blaise Pascal
14. IDEAS HAVE CONSEQUENCES by Richard Weaver (review)
15. TOTAL TRUTH by Nancy Pearcey

“Government grows more elusive every day. But the traditions of humanity support humanity; and the central one is this tradition of Marriage. And the essential of it is that a free man and a free woman choose to found on earth the only voluntary state; the only state which creates and which loves its citizens. So long as these real responsible beings stand together, they can survive all the vast changes, deadlocks, and disappointments which make up mere political history. But if they fail each other, it is as certain as death that ‘the State’ will fail them.”

– G.K. Chesterton, in his essay “Marriage and the Modern Mind” 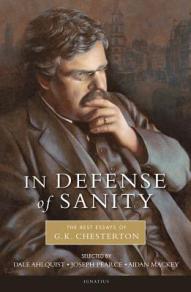 Calling G.K. Chesterton a prolific writer is the sort of understatement best left to men like Sir Cosmo Duff Gordon, who summed up his survival of the sinking of the Titanic with the words, “It was rather a serious evening, you know.” Do tell, old chap.

In addition to some eighty books, several hundred poems and short stories, not to mention a handful of plays, this happy intellectual behemoth (Chesterton, not Gordon) also wrote over five thousand – yes, 5,000 – essays.

Frankly, the thought of five thousand Chesterton essays floating around gives me a thrill like nothing else. Others may simply find it overwhelming. But whether this knowledge leaves you thrilled, overwhelmed, thrillingly overwhelmed, or overwhelmingly thrilled, there is a book that very much ought to be on your shelf: In Defense of Sanity.

Of course, if you think the way I do, your first reaction to the whole affair might be one of incredulity: how, you ask, do these three gentlemen propose to pass off this particular collection as the “best”? Who do they think they are? Fear not, I say, for Mr. Ahlquist anticipates your question. From the Introduction:

And who do we think we are calling any collection of Chesterton essays the “best”? The prospect of putting such a collection together seemed not just presumptuous, but impossible. Nonetheless, I agreed to participate in putting this volume together, especially since it was obvious that my presence on the committee would be necessary to balance those two Englishman. So I arranged their choices along with mine and did what good editors do, which is nothing. Thus we have a pure dose of Chesterton the Master Essayist. But no matter how large the book, any such collection will leave out shining literary gems, essays that are not merely outstanding, but perfect. Perfect, I say. How could a perfect essay not be included among the “best”? But I assure you we left several perfect essays out. And yet, here we are, trying to pass this collection off as The Best Essays of G.K. Chesterton.

We begin with the first essay of Chesterton’s first book, and we end with the last essay of his last book… Most of these essays are from previously compiled collections; however, a few of them are collected here for the first time. Two of the essays are not really essays but are transcripts of talks given by Chesterton. Why are they included? Because, as Chesterton’s wife and others attested, he talked just like he wrote.

Devoted Chesternuts and fresh-eyed converts will alike find much to savor here, and the variety of topics (even in so relatively small a collection as this) is intoxicating: we’ve got scribbles here about barbarians, architects, marriage, gargoyles, Jane Austen, poetry, sex, medievalism, Charles Dickens, and cheese – and that’s but a scratch on the surface. Rather than try to express my appreciation for each and every essay, I’ll just tip my hat to a few favorites.

Strange as it may sound, there was, in fact, an essay which I did not care for. This essay was “Mary Queen of Scots.” I found Chesterton’s line of reasoning here to be far weaker than usual; and I still do not feel the sympathy for Mary that he obviously wished me to feel. It is not that he didn’t score some excellent points, but his case as a whole was less convincing than his cases generally are.

In the Foreword, Aidan Mackey writes that “if you, reader of this volume, are fortunate enough to have contact with young readers of our own day, do, I implore you, introduce them to the essay form – and there is no better place to start than with G.K. Chesterton.”

Anna Karenina by Leo Tolstoy
Faulkner dubbed it the “the best novel ever written”, and I can see where he’s coming from. Until now, my only experience with Tolstoy had been The Death of Ivan Ilych, which I enjoyed but wasn’t blown away by. But this book… wow. Just wow. Leave it to a Russian with a epic beard to write something this fantastic.

Cities of the Plain by Cormac McCarthy
“In this final volume of The Border Trilogy, two men marked by the boyhood adventures of All the Pretty Horses and The Crossing now stand together, in the still point between their vivid pasts and uncertain futures, to confront a country changing or already changed beyond recognition.” McCarthy has yet to disappoint me. I don’t know how the story will end, but I know it will be magnificent.

Institutes of the Christian Religion, Vol. II by John Calvin
One down, one to go. And Calvin is being a boss, as usual.

Wool by Hugh Howey
YES. FINALLY. I’ve been aching to get my hands on this one since last year. I love the story behind it: Howey wrote it while working as a bookseller, writing faithfully each morning and during every lunch break for nearly three years. He self-published in 2011, and the book has since become an underground hit (Ridley Scott has even purchased the film rights). So yeah: I’m only slightly excited to see what all the buzz is about.

Her Hand in Marriage by Douglas Wilson
Something tells me this is gonna be a really, really good read: “The modern dating system is bankrupt. It does not train young people to form a relationship but rather to form a series of relationships, hardening themselves to all but the current one… Biblical courtship is a humble affront to the sterility of modern relationships. And as a new generation rejoices in this ancient wisdom, the current waves of broken relationships will begin to recede.”

In Defense of Sanity edited by Ahlquist, Pearce, & Mackey
It’s a collection of essays by G.K. Chesterton. And it’s awesome (duh). What more do want to know?

Why We Love the Church by Kevin DeYoung & Ted Kluck
From J.I. Packer: “Two young men, a pastor and a layman, here critique the criticisms of the institutional church that are fashionable today. Bible-centered, God-centered, and demonstrably mature, they win the argument hands down. As I read, I wanted to stand up and cheer.” While we’re on the subject, I’d like to recommend the other book these guys wrote, Why We’re Not Emergent. Seriously. Go read it. They make a terrific team.

What’s on your bookshelf right now?