I like a good argument. Not the petty kind, fraught with oh yeahs and nu-uhs; nor the kind that doubles as an excuse for intellectual posturing; but the kind that sees two guys (with a bottle of Guinness each) trying to hash it out over, say, the doctrine of the Trinity or Keynesian economics. And they do this, not as a matter of semantics, but with the aim of getting at the truth of the matter. Or at any rate, closer to the truth than they may have already been.

With the Internet, we carry our arguments into the virtual realm. Someone writes a blog post (like I am doing), or shares a link on Facebook, or tweets something on Twitter, and before you know it, a debate is in full-swing. Sometimes these debates are civil, and sometimes they are very uncivil. People sling arguments or they sling mud (or a very confusing mixture of both). Things get out of hand and soon people are losing sleep, punching their computer screens, and generally carrying on as if the world will end if they don’t get in the last word with That Bloody **** Who’s Wrong on the Internet.

This is badly done. And very, very stupid. And probably not good for one’s health.

It does not, however, follow that every argument on the Internet is an exercise in futility. Philip Sydney is my man: “What! shall the abuse of a thing make the right use odious?”

That is largely why I don’t appreciate it when someone comes along and – in an attempt to correct for all the abusers – ends up over-correcting. You’ve probably seen it before, variously worded, but driving at the same thing. An example:

“Wow, that’s a great point. You have caused me to change my mind.” – Virtually no one on the Internet ever

I guess this is intended to be a dash of reality for all the goofs who think living life means winning the War of the Webz. But I think it goes too far. I don’t like it, for a couple of reasons.

First, the assumption seems to be that the only arguments worth having are the ones you end up winning. If the person you’re chatting with isn’t a full fledged _________ by the time you’re done with him, well, why even bother? But you should bother. There are times when a thing just needs to be said, regardless of how many minds are changed in the saying.

Be discerning, of course. You should know when to speak and when to walk away. But don’t let that cow you into never touching a hot issue, simply because you’re afraid you won’t emerge with converts hanging off your sleeves. You may have given the other side something to think about, planted the first seeds of doubt; or you may have unwittingly strengthened the convictions of someone watching quietly from behind the battle lines. Human stupidity is a tremendous thing, but never underestimate the power of words. God could use yours in a way you never anticipate.

So I laugh a little, because it’s funny. And kind of pathetic, too.

I tangled with an atheist. Here’s how, here’s why, and here’s what I learned from it.

At the risk of sounding cliche, it all started through an online science fiction forum, which I had just recently joined. I soon became painfully aware that the atmosphere was (unsurprisingly) anti-Christian. In fact, it was pretty much anti-anything that had to do with religion. I guess you could think of it as a room full of raw oxygen: all it takes is a single spark and – in the immortal words of Barney Fife – “KABLOOIE!”

Leave it to yours truly to bring out, not just a match, but a whole stinkin’ flamethrower.

One of the other members wrote in to say that she was preparing to work her way through Isaac Asimov’s I, Robot. I responded that I had read it and enjoyed it; that the stories were all interesting, even though Asimov’s worldview was “off-base”. 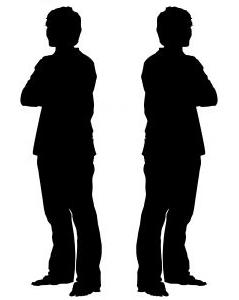 Now, I swear I wasn’t trying to start anything. Looking back, though, I have no idea why I thought I could get away with saying something like that. I should’ve seen what was coming next…

An athiest picked up on my comment. After two or three exchanges, that particular discussion thread pretty much exploded. It was as if the atheists on the forum were just waiting for somebody like me to step out of line, because as soon as I did – well, you get the picture. As the debate lengthened, the forum moderator (a rabid atheist herself ) eventually got fed up: she told us to pipe down or move our discussion elswhere.

We opted to pipe down. At least, for the moment.

Next thing I knew, my original “opponent” decided to write an entire blog post on the subject of the debate. He linked to it on the forum page and invited everyone to read it… even though I know he was probably eyeing me. I took the bait. The rest, they say, is history.

There really wasn’t a “winner”, per se, at all. The debate ended in a sort of draw – which is to say he got tired of arguing with me and told me to go away (though not in so many words). At any rate, I’m glad it happened. It was a learning experience for me; an oppurtunity to stand up, speak out, and consider. Here’s what I got out it it:

As the argument concluded and we went our separate ways, the atheist told me that he understood my position, even though he didn’t accept it. He’d grown out of it a long time ago, and he said he hoped I would do the same eventually.

By God’s grace, that’ll be the day pigs fly.

There have been numerous articles written about how the internet has reshaped the way we interact with people. A recent article in Christianity Today noted that,

Blogging is not an occupation to be taken lightly. You are in a position of leadership. Your thoughts, your beliefs, are available to the entire cyber world at the click of a button. And because of this “instant access” capability, it’s very easy lose sight of the responsibility to weigh our words. Instead of carefully considering what we’re going to say before we say it, we just sizzle and pop like cheap Chinese firecrackers.

These days, its a popular pastime to hop over to a prominent blog (say Challies or Veith), read the latest controversial post, and then throw oneself heart and soul into the vicious bar fight going on in the comments section. Put on your boxing gloves and angry eyebrows, ’cause it’s gonna get really ugly, really fast.

“There is one whose rash words are like sword thrusts, but
the tongue of the wise brings healing.” (Proverbs 12:18)

Now, don’t misunderstand me: I’m all for respectful, reasoned debate. And I’ve been privy to several comment-thread discussions that have been a real pleasure to read and participate in. But too often, what I see is not respectful, reasoned debate: it’s all out war. The participants aren’t concerned with engaging in a thoughtful discussion. They’re more concerned with humiliating, wounding, and retaliating against their brothers in Christ.

Whatever happened to Ephesians 4:15? “Instead, speaking the truth in love, we will grow to become in every respect the mature body of him who is the head, that is, Christ.”

When we catch sight of something in the blogosphere that we disagree with – whether it’s a post or a comment on that post – we don’t need to act as if the world is going to end if we don’t immediately respond. In fact, oftentimes the best thing to do is to just walk away: don’t respond at all. Resist that urge to pick a fight. In those cases where a response is in order, do so thoughtfully, firmly, and lovingly, in a manner consistent with the character of Him Whom you serve. Christians shouldn’t look at a debate as an opportunity to beat each other up. They should view it as an opportunity to teach, an opportunity to learn, an opportunity to quicken each other’s beliefs and convictions. Measure your words, for “death and life are in the power of the tongue, and those who love it will eat its fruits.” (Proverbs 18:21)

“Whoever keeps his mouth and his tongue keeps
himself out of trouble.” (Proverbs 21:23)