There be three things which are too beastly for me, yea, four which I will never understand:

An article entitled “Happy Daughters Day” – written by Elyse Fitzpatrick – was published this morning over at The Resurgence. After reading through it (twice), I must confess to being tremendously disappointed. I expected more of a writer of Fitzpatrick’s caliber. And believe me: that’s a statement I don’t make lightly.

My Mom has already written a response of sorts, so I’ll try not to waste time saying what has already been said. Also, I have schoolwork calling my name – it’s in my best interest to keep this short and sweet. So, here’s my half-cent:

First, I object to Fitzpatrick’s definition of Mother’s Day as “the Law” – a holiday that necessarily “breeds discontent and guilt.” To this I respond (with all due respect): Says who? I want to know why Mother’s Day must be viewed through such dark lenses. Why is this a given? I don’t doubt that there are some people who do look at it that way; what I want to know is why Fitzpatrick assumes most people look at it that way, as if it’s the only sensible and clear-headed position to take. Implicit in all of this is the idea that only the “enlightened” see Mother’s Day for what it really is: a day of guilt and glorified naval-gazing. Only the naive and the sentimental – the kind of people who watch the Hallmark channel – view it as something worth celebrating.

Second, I object to the way Fitzpatrick denigrates “honor” and “gift-giving”. She rightly observes that “we live in a sin-cursed world,” but goes on to say that “no matter how much we try to honor someone we love, it always seems to come out wrong. We can give the sweetest presents with the best intentions but still… it just never turns out like we hoped it would.” To begin with, “always” and “never” are strong words. And while it is true that I, being a sinner and living in a sinful world, cannot give gifts with perfect love and honor, why does it automatically follow that I cannot give gifts without any love or any honor? Can I not rejoice in honoring my mother – and in future, my wife – simply because it’s impossible for me to do it perfectly?

Third, I object to Fitzpatrick’s glib assumption that Mother’s Day is really “a celebration of our own goodness”. Again I respond: Says who? She points out that “any time you seek satisfaction, honor, and glory in yourself you’re going to be dissatisfied” and she’s entirely correct in saying this. But why must we think that Mother’s Day is about all of that? The pagan may think of it in those terms; I see no reason why the Christian should. The Christian realizes that the only glory he/she has is in the cross of Christ – that doesn’t make it sin to rejoice and celebrate the beauty of motherhood on a day like Mother’s Day. 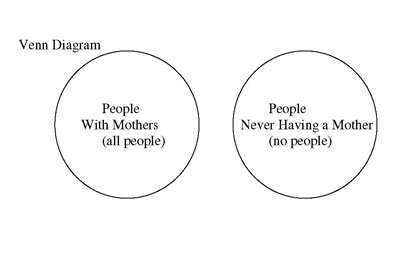 I’m fully cognizant of the fact that Mother’s Day can be painful for some. And I don’t wish to be harsh or unfeeling. Paul tells us to “rejoice with those who rejoice, and weep with those who weep”. Problem is, when it comes to Mother’s Day, it seems like we want to focus in on the second part of the admonition to the exclusion of the first. Are we called to have compassion, to encourage the discouraged and lift up the downtrodden? Of course. But that doesn’t mean we knock down the ones who are standing and tell them to keep their joy and thankfulness to themselves.

Nowadays, it takes no courage to be the cynic, the wet blanket, the ho-hummer, the forecaster of doom and gloom. It takes courage to stand up and say, “This is the day the Lord has made: let us rejoice and be glad!” Because the minute you do, somebody is going to play Eeyore.