If you’re on Twitter, chances are this nugget of wisdom has popped up in your feed at one time or another:

What bugs me about this statement – besides the fact that, as of now, it’s been retweeted over 8,000 times – is that it sounds wonderfully coherent without really being so. It’s predicated on the assumption that Islamic terrorism and the WBC both share the distinction of being fringe movements. Which is false. And here’s why.

Members of the Westboro Baptist Church are, indeed, on the fringe. (Actually, they fell off the fringe a long time ago.) The “gospel” they espouse is no gospel at all, and their “Christianity” is a Christ-less one. When the WBC preaches its hate-filled messages and engages in its hate-filled demonstrations, we can point out, with complete honesty, that such behavior is inconsistent with – indeed, diametrically opposed to – the teachings of Scripture. It shows nothing of the “family resemblance” of the family of Christ.

But what about Dzhokhar and Tamerlan Tsarnaev, currently suspected of perpetrating the Boston Marathon bombings? Can we really and truly say that their actions were “inconsistent” with the teachings of the Qur’an? What about Mohammed Bouyeri, who shot Theo van Gogh eight times, cut his throat, stabbed him in the chest, and left two knives embedded in his corpse with a note attached? Can we really and truly say that this assassination was “diametrically opposed” to the core tenets of Bouyeri’s faith?

No. No we cannot. Not when a basic understanding of Islamic history and the Qur’an tell us otherwise.

Are all Muslims bloodthirsty killers eager to strap on C4 and hijack an aircraft? Of course not. I have no doubt that there are many Muslims who decry acts of terrorism with as much vigor as the rest of us. But let us not confuse the individual with the ideology. Moderate Muslims do exist, but moderate Islam? the so-called “Religion of Peace”? It exists only in fairyland.

In conclusion, therefore, my point is simply this:

Sorry, @Yasirajaan, but that analogy is a no-go.

While on vacation, I had the opportunity to watch the highly acclaimed (and highly controversial) Harry Potter series. Yes, yes, it’s true – and for those of you who temporarily fainted out of shock, the smelling salts are in the medicine cabinet.

It was interesting, to say the least, and sharing the experience with friends was an added bonus. We watched the films, thought about them, and used them as fodder for several healthy discussions. Our opinions varied a bit from person to person, but ultimately, the general consensus seemed to be this: Harry Potter was neither as good nor as bad as we were expecting it to be.

END_OF_DOCUMENT_TOKEN_TO_BE_REPLACED

Whenever I see a “COEXIST” sticker (like the one above) on the back bumper of a car, I can’t help but laugh. I realize that many people slap it on their vehicles under the naive assumption that they’re saying something profound in an incredibly clever way. Then again…

When you stop and think about it; when you consider the implications of that word in that context… is it really such a clever slogan after all? Is it even intelligent? I would say not. Granted, it looks cool and it sounds cooler; but if you throw away the rose-colored “let’s all just get along and have world-peace” glasses, it’s quite plain that the “COEXIST” sticker is nothing more than godless asininity dressed up in a fancy ball gown.

Sure, I reply. That’d be dandy! Smashing! Positively phenomenal!

Unfortunately, in a world desiccated and corrupted by sin, it’s impossible. Nice thought, yeah – but totally out of touch with reality. No can do, crackerjack. Sinners can’t just “be nice” and “coexist” together as one big happy family. Sinners lie. Sinners hate. Sinners kill. Sinners SIN. There can be no “peace” in sin.

But there’s another reason the sticker is false…

Behind it lies religious pluralism: the fundamentally-flawed belief that all religions are true and valid. That very idea alone worthy of head-scratching in a “what the heck?” sort of way.

Let’s see. What have we here?

Each of these religions claim something different as truth. That’s all good and well, but they cannot all be correct. If I say the sky is blue and you say it’s purple with pink polka dots, we’ve just made two contradicting statements. Either one of us is right and the other is wrong, or both of us are both wrong. Point is: we cannot both be right.

Just consider the Christian religion. It’s very foundation rests on the claim that Jesus Christ, the God-Man, is Lord and Savior; the one and only Lord and Savior. Christ says it Himself in John 14:6, “I am the way, the truth, and the life: no man cometh unto the Father, but by me.”

That’s a pretty strong statement. He doesn’t say, “I am one of many ways, one of many truths, one of many sources of life.” His claim is exclusive: you come to God by Me and by Me alone. In modern speak, that adds up to, “My way. No highway option.”

Obviously, Jesus is no pluralist. Either He’s right and all other religions are wrong; or else He’s wrong and some other view is right. In no case, however, can all religions be true and valid.

That’s about as black and white as you get.

That means I’ll take my faith and it’s implications seriously. That means I’ll not be content to keep my religion to myself, to simply “be nice” and “avoid stepping on toes” while the world goes to hell in a hand-basket. That means I’ll act upon the biblical injunction to shine the light of the Gospel of Christ wherever I go. That means I’ll recognize the notion of “coexistence” for the fallacy that it is.

In the words of Charles Spurgeon,

If sinners be damned, at least let them leap to Hell over our dead bodies. And if they perish, let them perish with our arms wrapped about their knees, imploring them to stay. If Hell must be filled, let it be filled in the teeth of our exertions, and let not one go unwarned and unprayed for. 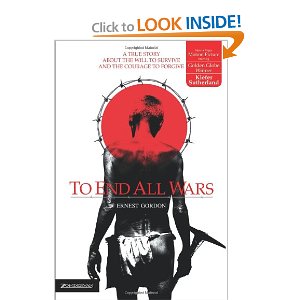 Gripping. Poignant. Inspiring. Thought-provoking. Every one of these words could be used to describe Ernest Gordon’s To End All Wars. And yet, strangely enough, none of them would fully do it justice. It is a war story, to be sure: but it’s unlike any other war story I’ve ever read.

Originally published in 1963 under the title Through the Valley of the Kwai, this book is Ernest Gordon’s first-hand account of the time he spent in a Japanese prison camp during World War II.  A native of Scotland, and an officer in the Argyll and Sutherland Highlanders, Gordon was captured by Japanese troops at the age of twenty-four and forced, along with other Bitish prisoners, to build the infamous “Death Railway” – a 285 mile long railway stretching between Thailand and Burma. Faced by the brutality of the guards and the squalor of the prison camp, Gordon and many others gave themselves over to anger, bitterness, and despair.

But then something unexpected happened. Inspired by Dusty Miller, a fellow inmate and ardent Christian, Gordon began reading the Bible anew, and came to a saving knowledge of Christ as a result (when the war was over, he went on to become a Presbyterian minister). He organized a regular Bible study so he and the other prisoners could meet to discuss what they had read in God’s Word. A change both dramatic and profound was wrought in the attitude of the men.

As we became more aware of our responsibility to God the Father, we realized that we were put into this world not to be served but to serve. This truth touched and influenced many of us to some degree – even some of those who shunned any religious quest. Men began to smile – even to laugh – and sing.

The resurgence of life increased. It grew and leavened the camp, expressing itself in men’s increased concern for their neighbors.

But these men also faced another challenge, and one that was much more difficult: that of loving and forgiving their enemies. The Japanese prison guards were savage men who enacted countless cruelties on their prisoners without a second thought. To demonstrate love towards them exceeded the bounds of all human reason.

But since when was human reason the scale by which Christians measure their actions?

Through God’s grace, Gordon and the others found the strength to return good for evil. One particularly striking example of this occurs when the prisoners administer aid to wounded Japanese soldiers:

They were in a shocking state; I had never seen men filthier. Their uniforms were encrusted with mud, blood, and excrement. Their wounds, sorely enflamed and full of pus, crawled with maggots…

We understood now why the Japanese were so cruel to their prisoners. If they didn’t care a tinker’s damn for their own, why should they care for us?

Without a word, most of the officers in my section unbuckled their packs, took out part of their ration and a rag or two, and, with water canteens in their hands went over to the Japanese train to help them. Our guards tried to prevent us… but we ignored them and knelt by the side of the enemy to give them food and water, to clean and bind up their wounds, to smile and say a kind word. Grateful cries of “Aragatto!” (“Thank you!”) followed us when we left…

We had experienced a moment of grace, there in those blood-stained railway cars. God had broken through the barriers of our prejudice and had given us the will to obey His command, “Thou shalt love”.

The story behind this book is one which inspired two major motion pictures, the Academy Award-winning The Bridge On the River Kwai (1957) and David Cunningham’s more recent adaption To End All Wars (2001). The former, however, is grossly inaccurate and touts the myth that the POWs gleefully assisted in the building of the railway in order to demonstrate British superiority; in reality, the POWs did all they could to sabotage the construction. The latter film remains primarily true to the book, but it’s underscored by a more pacifistic message and the Christian themes are somewhat watered-down.

If you do read this book – and I highly recommend you do – be warned that it contains some graphic subject matter. It is a POW story after all, and Gordon doesn’t pull any punches in describing the horrors endured by the inmates of the prison camps.

In conclusion, the description on the back cover of the book states that To End All Wars is an “example of the triumph of the human spirit against all odds”. But human spirit has nothing to do with it. Rather, Gordon’s story is a testament to the redemptive power of God’s grace in the most horrific of circumstances.

In keeping with Friday’s review of J.C. Ryle’s A Call to Prayer:

“If any of you should ask me for an epitome of the Christian religion, I should say that it is in one word – prayer. Live and die without prayer, and you will pray long enough when you get to hell.” ~ Charles Spurgeon