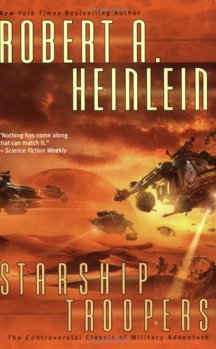 The historians can’t seem to settle whether to call this one “The Third Space War” (or the fourth), or whether “The First Interstellar War” fits it better. We just call it “The Bug War.” Everything up to then and still later were “incidents,” “patrols,” or “police actions.” However, you are just as dead if you buy the farm in an “incident” as you are if you buy it in a declared war…

In Starship Troopers, Jaun “Johnnie” Rico signs up with the Federal Service and struggles through the toughest bootcamp in the Universe, determined to make it as a cap trooper with the Terran Mobile Infantry. But the hardest part is yet to come – when he’s thrown into battle against an enemy unlike anything mankind has faced before.

Looking for futuristic weaponry, space soldiers, and nasty aliens? This is the book for you. Looking for a mental workout to get the old lemon throbbing? This is also the book for you. Or to put it another way: are you a sci-fi enthusiast with a taste for politics and moral philosophy? Read Starship Troopers. It has both in equal measure.