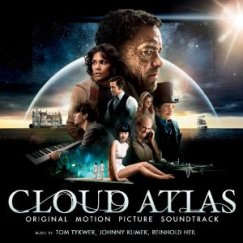 The film adaption of David Mitchell’s Cloud Atlas is releasing in theaters this weekend – a fact which has me both excited and apprehensive. Great literature and Hollywood do not, in my experience, go well together, and I’d hate to see such a magnificent novel turned into a lackluster movie. But enough about that – I’m here to talk about the music. I could probably spend a few dozen paragraphs extolling the brilliance of it, but I’ve chosen to reduce my commendation to two simple sentences: the Cloud Atlas soundtrack is finally here. Buy it now.

The main theme is an exquisite piano melody, otherwise known as The Atlas March. It’s introduced early on and reappears frequently (and in different forms) throughout the rest of the score – the thread that holds Tykwer’s musical tapestry together. Though the score as a whole is not action-oriented, tracks like The Escape and Chasing Luisa Rey deliver more than their share of excitement. Cavendish in Distress has a comical sound to it (appropriate, considering the character in question), while Papa Song throbs with futuristic ambience. Good stuff, to be sure, but the most powerful moments occur in pieces like Sonmi-451 Meets Chang, Death Is Only A Door, Finale, and End Title – for it is in pieces like these that the orchestra is allowed to soar in all its spectacular, cloud-brushing glory.

Buy the MP3 album on iTunes or Amazon.com.