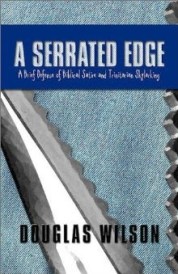 I’ve always appreciated satire. For me, it is and always will be the supreme form of humor – not only do we get the laughs, but we get the point, too. And it usually hurts.

Much as I love satire, however, I’m also well aware that it gets the Frown of Pious Disapproval in many Christian circles. Slip up, and you’re bound to get your metaphorical knuckles rapped. “Sarcasm? Pointed humor? Sharp discourse? Surely these things are contrary to biblical Christianity.”

Enter Douglas Wilson and his book, A Serrated Edge. My copy arrived in the mail last week, and after reading it, I wanted to stand up and cheer. It’s just that good. If you’re unconvinced that satire can (and should) be used by Christians, read this book. You will be convinced. If you’re tired of all the metaphorical knuckle-rapping, and wish to arm yourself with a scriptural defense of satire, read this book. You will be armed.

And of course, if you’re just looking for good writing, saturated in Bible and peppered with wit, you won’t be disappointed either. This book has all three.

Over the course of 120 pages, we’re treated to a “brief defense of biblical satire and Trinitarian skylarking.” Brief it may be, but not for lack of substance. Wilson makes his case and he makes it well: satire is a kind of preaching. It is pervasive in Scripture. And it handles the follies and sinfulness of man with less than perfect tenderness.

Contrary to popular evangelical opinion, there are times when giving offense is the proper (i.e. biblical) response to controversy. Christ himself demonstrated this when confronting the ecclesiastical obstinacy and pride of the scribes and Pharisees – calling someone a white-washed sepulcher isn’t exactly the way to make friends.

All things considered, we can see that Christ’s use of satire in controversy hardly qualifies  Him as the original verbal pacifist. Quite the reverse. If there is anyone in Scripture who uses the form of expression as the most normal thing in the world, it is the Lord. (p. 46)

We also find satire in the Old Testament. The book of Amos is thoroughly satiric in tone. Proverbs, Job, and Isaiah dish up some humdingers, too. Elijah mocks the prophets of Baal mercilessly in 1 Kings 18 – and in the original Hebrew, his taunts are even more pointed: “Perhaps your god is off in the bathroom. His prophets are all gathered in the hallway with an anxious look on their faces. Bang on the door louder. He’s been in there a long time.” (p. 53)

Clearly then, to say that satire is not found in scripture is indicative of extreme ignorance, incredible obstinacy, or a severe case of HSRS (Highly Selective Reading Syndrome).

Incredibly, however, the naysayers still exist, and their objections are Legion. The latter can generally be divided into two categories: first, that satire is unkind, and therefore unbiblical; and two, that it is counterproductive and alienating. In the Preface, Wilson writes,

Our response to these objections could be summarized in a two-fold fashion, reading from left to right as Oh yeah? and Nuh uh. But this requires further development. (p. 9)

And develop it he does.

Readers familiar with Wilson’s writing will not be surprised to hear that A Serrated Edge is a funny book. Very funny. It’s an argument, yes, but a jolly humorous one: Wilson isn’t one to let a good joke (or jibe) go, and his joie de vivre is largely what makes the book so enjoyably engaging. I can’t help but think that he wrote the entire thing with a wink in his eye and a grin on his lips.

Of course, when all is said and done, we’re still left with the question of why satire is such an issue for Christians in the first place:

We have noted that the Bible contains much satire. And while it is possible to overstate this point, our dangers generally lie in the other direction – the direction of assuming that we have biblical warrant for that which is sweety-nice. In other words, the real dilemma should confront those who would undertake a biblical defense of writing like the author of the Elsie Dinsmore series. While there are things in the Bible that might even resemble Swift’s Modest Proposal, there is nothing that remotely resembles nineteenth century sentimentality. So why is it that those who write such things never have to give a biblical defense of what they are doing? And why do I have to write this book defending a scriptural approach, and those who write books with titles like When Throbs the Heart never have to explain themselves at all? (p. 47)