I usually avoid modern Christian fiction, simply because most of it tends to be brain-deadening fluff with little or no spiritual substance. Thankfully, however, there are exceptions. And Randy Alcorn’s crime thriller Deception is one of them.

As he digs deeper, Chandler becomes increasingly certain that the killer is someone in his own department. And that’s not even the worst of it; because whenever he tries to remember where he was during the time of the murder, his mind draws a complete blank.

Joined by journalist Clarence Abernathy and their friend Jake Woods, Chandler continues the investigation, determined to unearth the truth, no matter how ugly it is. And the farther in they go, the deadlier the game becomes. 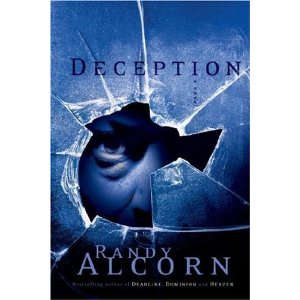 Deception is part of a “series” of thrillers (the other two being Dominion and Deadline), but it can be read independently. It has a lightning-fast pace, yet never feels rushed or skimpy. There’s actually something to chew on, something to think about. Alcorn manages to incorporate solid, biblical themes into the story without making them feel tacked on. Meaty reflections about God, justice, sin, and redemption all flow naturally from the characters and from the plot. They never feel pretentious or out of place. And that, in and of itself, is an excellent achievement, if you ask me.

The story is completely engrossing, with multifarious twists and turns; and best of all, there’s a gritty realism to it that makes it thoroughly believable. Alcorn must have done his homework. Plenty of it. Because not only does the story feel real, so do the characters involved. No cardboard, one-dimensional heroes and cheesy villains here. Each person is multi-faceted, interesting, and unique. Particularly Ollie Chandler. He’s a troubled man, angry at God and himself, struggling with the idea that there’s any real meaning in life. His philosophy is simple: there is no justice, there’s just us. The reader can feel his grief and hardened cynicism, and yet rejoice as his eyes are gradually opened to the truth of the gospel. He’s someone you can genuinely sympathize with, and genuinely root for.

Another thing that makes Chandler such a great character is his unflagging (and often grim) sense of humor. Years of active duty with Portland Homicide has given him an tough, no-nonsense nature, but he still retains a funny bone. As he casually observes on one occasion, “Messin’ with me is like wearin’ cheese underwear down rat alley.” In other words, not too smart.

Deception is a crime thriller, folks, which means it’s definitely a book I’d only recommend for very mature readers. Though he never resorts to language or sexuality, Alcorn tackles some extremely dark and edgy subject matter related to the seedy underworld. There are numerous references to drugs and immoral behavior, as well as detailed descriptions of bloody crime scenes. And the violence, while never gratuitous, is pervasive and often brutal.

So, if you’re in search of an above-averege suspense story that is edifying to both mind and soul, read this one. It’s one of your best options, without a doubt. I’ve gone through it twice now, and it was just as exciting and satisfying the second time around.