One of my favorite scenes from
Christopher Nolan’s Inception (2010)…

“Yes, from first to last, from our cradle to our grave, from the earliest pang of sin’s conviction, to the last thrill of sin’s forgiveness, from earth to heaven – this will be our testimony in all the way the Lord our God has led us in the wilderness: ‘He has done all things well!’

“Has He converted us through grace by a way we had thought the most improbable?
Has He torn up all our earthly hopes by the roots?
Has He thwarted our schemes, frustrated our plans, disappointed our expectations?
Has He taught us in schools most trying, by a discipline most severe, and lessons most humbling to our nature?
Has He withered our strength by sickness, reduced us to poverty by loss, crushed our heart by bereavement?

“And have we been tempted to exclaim, ‘All these things are against me!’
Ah! no! faith will yet obtain the ascendancy, and sweetly sing:
‘I know in all things that befell,
My Jesus has done all things well!’

“Beloved, it must be so, for Jesus can do nothing wrong!

“Study the way of His providence and grace with the microscopic eye of faith – view them in every light, examine them in their minutest detail, as you would the petal of a flower, or the wing of an insect; and, oh, what wonders, what beauty, what marvelous adaptation would you observe in all the varied dealings with you, of your glorious Lord!” 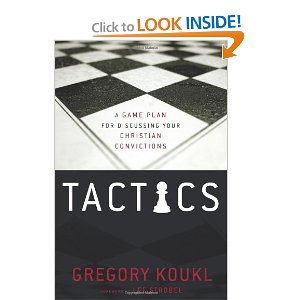 Gregory Koukl’s Tactics is one of those books I’d have read much sooner had I realized how good it was. After I finished it, I immediately added it to my favorites, and I’m already certain that it will be among the best, most helpful books I’ll read this year.

Tactics is essentially a game book for discussing your Christian convictions, specifically with non-believers. Koukl – who holds MA degrees in both apologetics and philosophy – introduces various techniques that will help you share your faith with others more confidently,
graciously, and effectively.

In the first chapter, Koukl points out the difference between strategy and tactics, something I had never particularly considered before.

Strategy involves the big picture, the large-scale operation, one’s positioning prior to engagement… Tactics, literally the ‘art of arranging’, focus on the immediate situation at hand.

He also points out another simple but oft overlooked fact: apologetics is not about beating the other guy over the head with your ideas.

Jesus said that when you find yourself as a sheep among wolves, be innocent, but shrewd (Matthew 10:16). Even though there is real warfare going on, our engagements should look more like diplomacy than D-Day.

In this book I would like to teach you how to be diplomatic. I want to suggest a method called the Ambassador Model. This approach hinges more on friendly curiosity – a kind of relaxed diplomacy – than on confrontation.

As ambassadors for Christ, we must be always be prepared “to make a defense to anyone who asks you for a reason for the hope that is in you” (1 Peter 3:15). Yet we are to do this with “gentleness and respect”. The Ambassador Model which Koukl mentioned essentially consists in the following creed, which he shares towards the end of the book.

Koukl shares nine useful tactics throughout the course of the book, and these include:

Here’s an example of how Koukl practically utilizes the last tactic, Suicide, to dismantle Theistic Evolution:

Some people suggest that God used evolution to design the world. They are motivated, I think, by two impulses. The first is the desire to affirm the Bible. The second is a suspicion that Darwinism might have merit. Thus, they declare both to be true.

These two notions, however, seem incompatible to me. It may sound reasonable for God to “use” evolution, but if you look closer I think you will see the problem.

Suppose I wanted a straight flush for a hand of poker. I could either pull the cards out of the deck individually and “design” the hand, or I could shuffle the cards randomly and see if the flush is dealt to me. It would not make any sense, though, to “design” the hand by shuffling the deck and dealing. There’s no way to ensure the results. (I guess if I were really clever I could make it look like I was shuffling the deck when in reality I was stacking it, but that would be a deceitful kind of design called “cheating”.)

In the same way, God either designs the details of the biological world, or nature shuffles the deck and natural selection chooses the winning hand. the mechanism is either conscious and intentional (design), or unconscious and unintentional (natural selection). Creation has a purpose, a goal. Evolution is accidental, like a straight flush dealt by a poker rookie.

I wouldn’t recommend it for anyone under 14 (due to mature content), but for older readers Tactics really is a must-read. As another critic put it, “Greg Koukl is a wise, seasoned, front-lines apologist. I am happy to recommend a book so full of practical insights and careful guidance for skilfully, winsomely defending the Christian faith.”

“When you are a Bear of Very Little Brain, and you Think of Things, you find sometimes that a Thing which seemed very Thingish inside you is quite  different when it gets out into the open and has other people looking at it.”