Finally, we were on the way to our real landing zone. The final call came – “Redwing is a go!” The landing controller was calling the shots: “Ten minutes out… Three minutes out… One minute… Thirty seconds!… Let’s go!”

One night in June of 2005, four U.S. Navy SEALs embarked on Operation Redwing. They were dispatched from their base in northern Afghanistan to the mountainous Pakistani border, where they had orders to capture or kill a notorious al Qaeda leader, who was known to be hiding in a Taliban stronghold. Less than 24 hours later, only one of those
Navy SEALs was left alive.

Lone Survivor is the story of Leading Petty Officer Marcus Luttrell, one of the four SEALs engaged in Operation Redwing – and the only SEAL to make it out alive. In an honest and straight-forward style, Luttrell takes the reader through the bloody, heart-stopping events that took place during the ill-fated mission that resulted in the largest loss of life in Navy SEAL history.

The phrase ‘page-turner’ is much overused these days, and many books sporting that lofty praise are anything but. However, when I say that Lone Survivor is a page-turner, I mean it is a page-turner. Every time I picked it up, I inevitably had a hard time putting it down. Yeah, it’s that good. 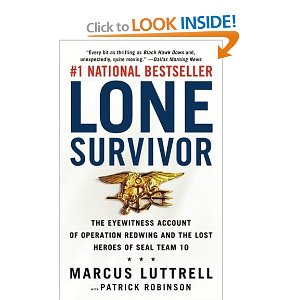 At times, I had to remind myself that I was reading a true story, and not some novel detailing the unbelievable exploits of James Bond. Consider: Luttrell endures a vicious firefight with an overwhelming enemy force, and miraculously escapes. Over the next four days, injured and presumed dead, he kills six al Qaeda assassins sent to finish him off, is shot multiple times, blasted unconscious by a rocket grenade, blown over a cliff, and crawls seven miles before being sheltered by a Pashtun tribe, who risk their lives to protect him from the Taliban. Impressed?

Aside from being a powerful narrative about Navy SEAL life, the events of Operation Redwing, and modern warfare in general, Lone Survivor is the story of manly men. Brave men. Honorable men. Patriots in every sense of the word. Men who were not afraid to lay down their lives for their country and for each other. We need more men like that.

Luttrell’s story comes highly recommended by me, with a couple of cautions…

First, I must warn you that the language in this book is very heavy. I counted upwards of forty strong obscenities, as well as other swear words, including numerous uses of God’s name in vain. Thus, I am extremely hesitant to recommend it to anyone under 17.

Second, don’t read this if you have an aversion to political-incorrectness or liberal-bashing, because there’s plenty of both in Lone Survivor. I had a hard time not cheering when I read passages like this one:

It’s been an insidious progression, the criticisms of the U.S. Armed Forces from politicians and the liberal media, which knows nothing of combat, nothing of our training, and nothing of the mortal dangers we face out there on the front line. Each of the six of us in that aircraft en route to Afghanistan had constantly in the back of our minds the ever-intrusive rules of engagement.

These are drawn up for us to follow by some politician sitting in some distant committee room in Washington, D.C. And that’s a very long way from the battlefield, where a sniper’s bullet can blast your head, where the slightest mistake can cost your life, where you need to kill your enemy before he kills you.

And these ROE are very specific: we may not open fire until we are fired upon or have positively identified our enemy and have proof of his intentions. Now, that’s all very gallant. But how about a group of U.S. soldiers who have been on patrol for several days; have dodged rocket-propelled grenades and homemade bombs; have sustained casualties; and who are very nearly exhausted and maybe slightly scared?

How about when a bunch of guys wearing colored towels around their heads and brandishing AK-47s come charging over the horizon straight toward you? Do you wait for them to start killing your team, or do you mow the bastards down before they get a chance to do so?

That situation might look simple in Washington, where the human rights of terrorists are often given high priority. And I am certain liberal politicians would defend their position to the death. Because everyone knows the liberals have never been wrong about anything. You can ask them. Anytime.